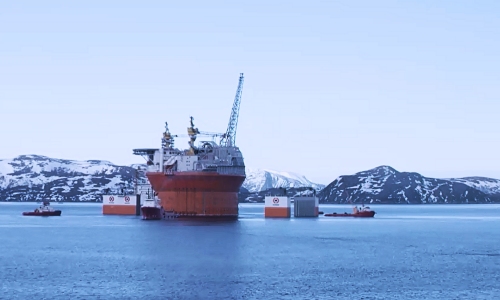 14. Calls on the EU to promote strict precautionary regulatory standards in the field of environmental protection and safety for oil exploration, prospection and production internationally; calls for a ban on oil drilling in the icy Arctic waters of the EU and the EEA and for promotion by the EU of comparable precautionary standards in the Arctic Council and for Arctic coastal states;

We would like to take the opportunity to add some comments on these three paragraphs and remain at your disposal if you should require any further information.

The Arctic is not a uniform Arctic

First of all, the geographical area of “Arctic” is not specifically defined in the Report. It is therefore very difficult to determine the scope of the paragraphs.

1/3 of Norway's land area and 80 percent of Norway's sea areas lie north of the Arctic Circle. Because of these favourable conditions a variety of industrial activities and fisheries has a long history in the high north. Oil and gas production has taken place in the Norwegian Sea since 1993 and in the Barents Sea since 2007. During this time the Norwegian authorities have developed integrated ocean management plans that have secured sustainable coexistence between inter alia the fishing industry, shipping and the oil and gas sector. These plans are based on scientific research and are regularly revised to take into account new developments and knowledge. When opening up areas for petroleum activities the highest environmental standards are applied throughout the entire process.

10 percent of Norway’s population live above the Arctic circle, and the economic growth in Northern Norway during the last years have been higher and the unemployment rate lower than in the rest of the country. The large oil and gas deposits that are assumed to exist in the Barents Sea will bring significant investment and further economic development in the region. The industry in the Norwegian Arctic has the potential for substantial value creation and increased employment for the people of the Arctic, but also for value creation in the Nordic region and the EU as such.

According to the International Energy Agency, IEA, approximately one third of the world's energy demand must come from oil and gas in 2050. The EU has outlined energy security as one of the cornerstones of the Energy Union strategy and as a key political priority. Norway is the second largest supplier of gas to the EU, after Russia. Norwegian gas covers more than 20 percent of the European gas consumption and as such makes an important contribution to energy security in Europe.

More than half of the remaining oil and gas resources at the Norwegian continental shelf are expected to be located north of the Arctic Circle. A ban on extraction of Arctic oil and gas is therefore a threat to the continued supply of Norwegian gas to Europe and to the European energy security. This was recognized by the European Parliament in 2014 when it underlined that the EU will be a main consumer of Arctic natural gas, produced in a safe and environmentally responsible manner, by reliable suppliers.

Climate change is a fundamental threat to our global community. The implementation of the Paris Agreement on the reduction of emissions of greenhouse gases is of paramount importance to the Arctic as well as the rest of the globe. Global warming is a global challenge in need of global solutions. It cannot be solved by symbolic actions.

Oil and gas recovery in the Arctic has in principle the same effect on the climate as recovery elsewhere. However, the Norwegian oil and gas industry has a progressive climate agenda as demonstrated through its world leading carbon performance. Oil and gas production in Norway has on average some of the lowest CO2 intensity in the world including zero routine flaring. All production is included in the EU ETS carbon trading system as well as subject to an additional Norwegian carbon tax. In the EU, gas is used to serve as a back-up to the increasing share of renewable energy, and if Norwegian gas to Europe were to be replaced by coal, EU emissions would increase by 300 million tons CO2.

We urge you as members of the European Parliament to take these comments and our Nordic perspective into consideration regarding the three paragraphs mentioned above in the plenary vote on the Arctic report.